fixing two Century (or at least one)

Having problems with a Seagull? - ask an expert here

But I don't regret removing the black layer on the metal, it was looking truly awful.
Top

Just showing you the latest progress on my 1970 Century 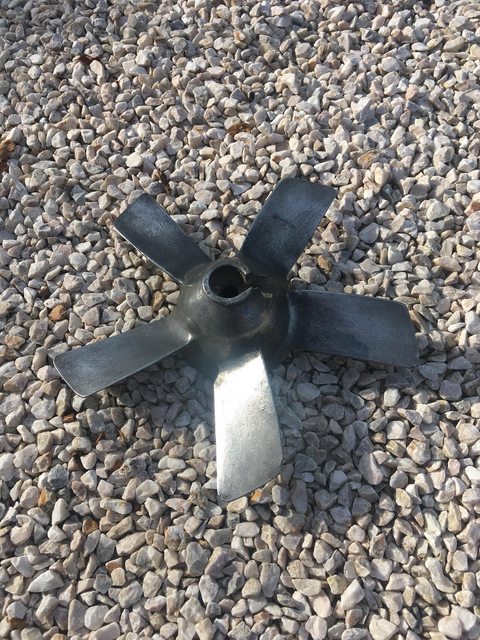 Main shaft and exhaust pipe cleaned (but they were heavily marked) 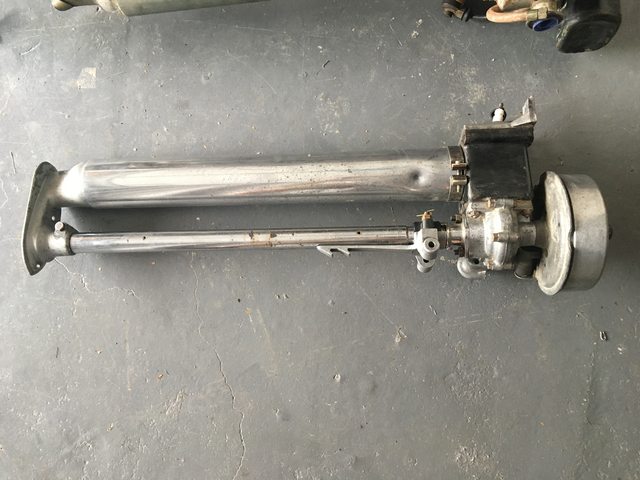 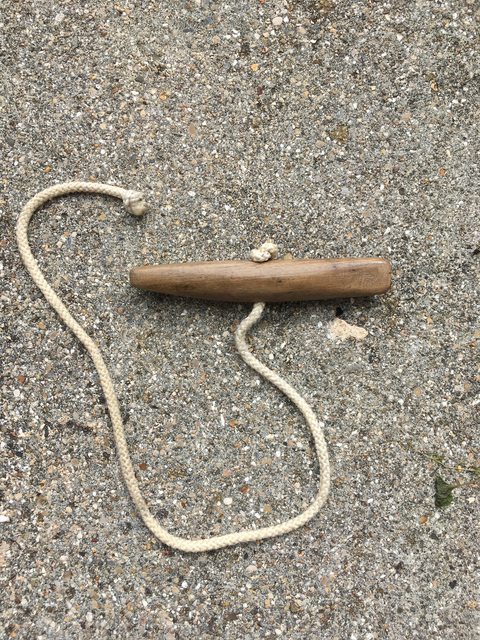 And this is my fuel tank, the instructions decal is barely readable. I'm surprised by the filler cap style, it does not match any other Seagull photo I could check. It's solid brass, with a weird (probably home made) vent screw. It fits perfectly though. 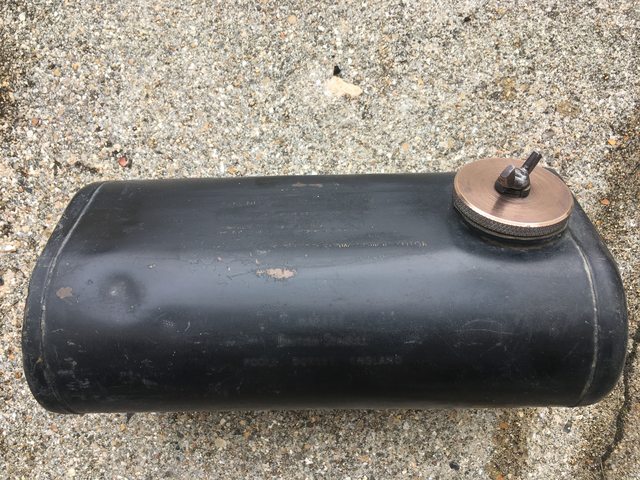 Do you think it's genuine ?
Top

Good thing for the 1970 Century: I adapted a new connector that looks a bit classic to the HT lead. The old one was missing. 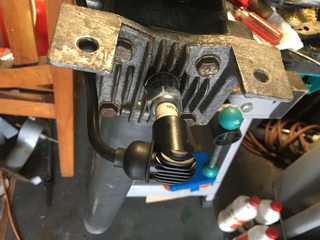 On the other hand, I still have difficulties to open the 1966 Century gearbox. I managed to remove 2 screws but the one middle top (bottom left on this picture still resists. And regarding the plastic plug, it simply sheared after too many efforts to unscrew it. I finally drilled through it to empty the oil, but there was no oil at all inside, just powder. I hope it's not the remains of the pinions...

Any idea to remove what's left of the stuck plastic plug ? Burn it ? 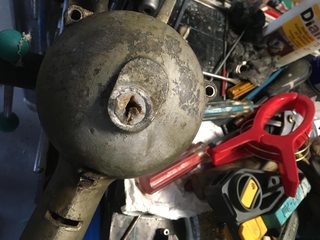 re first one with stuck plug and screw.

With no volatile oil in the box - and the plug drilled open - heat will not matter.
Get the plug out with heated flat bar - melt it in - let it cool - twist out ?

While you still have a useable slot on the screw head - heat it hard.
I use a cordless type flat screwdriver bit mounted in a socket wrench ( they fit into a 1/4 AF socket )
You can then exert huge pressure down while using a bar to turn.

That said - I have had one that just sheared off - but it drilled out fairly easily. Once a hole is down the middle they often come loose once enlarged enough ?

While waiting for a new proper propeller shaft, I have a question for Seagull clutch experts:

How tight should the clutch rod be screwed in the fork? 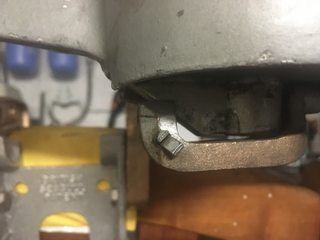 When engaged in gear (fork down, which means towards the left on this picture) should the fork roller be all the way down on the slope or half-way like it is now ?

I guess I must unscrew the rod to set it longer than it is now... waiting for your advice
Top

Clutch fork should sit with no friction between gearbox housing and prop when not engaged.

You’ll find it’s not too hard to adjust to correct length once all the pieces are back together, there’s a natural “feel” to it. Want to make sure the clutch fully engages and disengages the gears inside, and doesn’t slip in/out of gear when running (obviously).

I’ve found that once the motor is running, the clutch can behave a bit differently than it did on the workbench. Usually the selector rod just needs a couple turns one way or the other for final tuning at this stage.
Top

I guess I finished fixing the 1970 Century, enough to try it at least 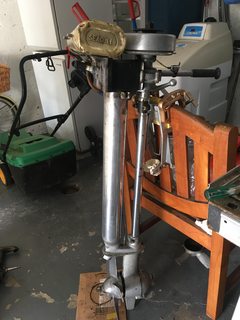 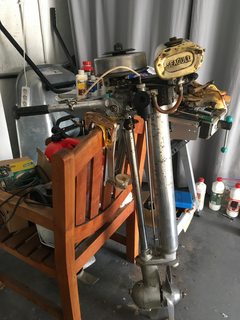 I just must boil the old cork of the tap, fill the gearbox with oil and mix the 10/1 fuel before firing it
Top

I have a question regarding the carburetor tuning, what are the settings that should be checked ?

-Point gap: set at 0.5 mm (not on the carburetor of course, in the ignition parts)
-Needle height: right now flush with the top of the throttle valve piston

Is that it ? How to adjust the idle speed ?
Top

These carbs are not designed to “idle” at 0 throttle as they don’t have a kill switch. When throttle is at nothing, engine should cut out. Raising and lowering needle height will cause the engine to run richer or leaner(fuel air mix), I believe.
Top

This Saturday was glorious for my 1970 Century.

After filling the gearbox with SAE 140, I displayed the outboard under the sun in my garden for all to see (of course I was alone) 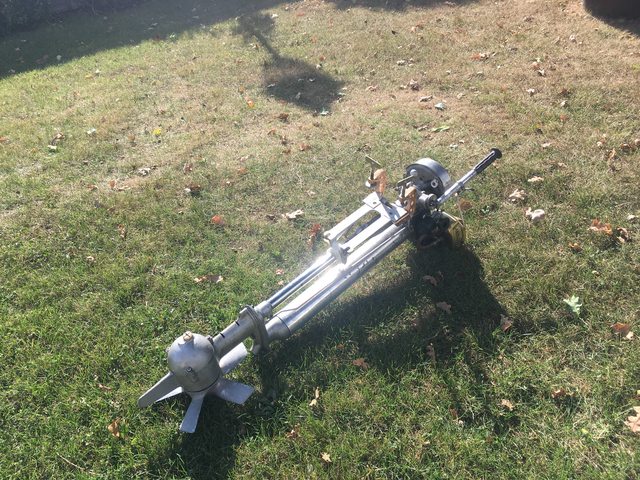 I then tried to fit it to my Testing Bin but alas, the long shaft meant that I had to improvise a not-so-secure solution for the first trial. I wonder if they sell taller bins for the serious engine testers. 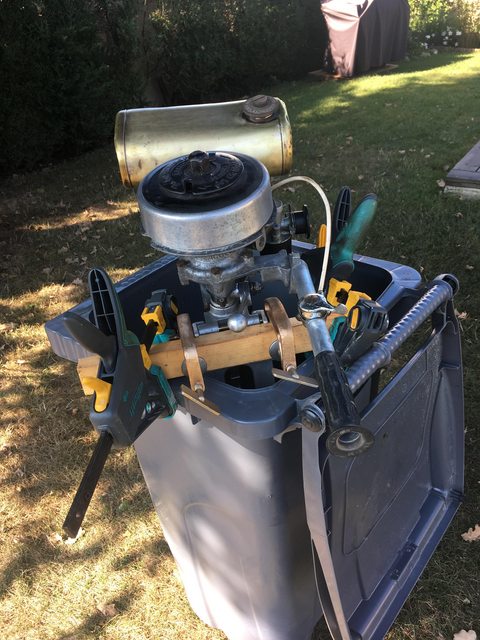 I filled the tank with the 10/1 mix, which immediately started leaking from the tap; but for unknown reasons, this leak stopped by itself soon after (and no, the tank was not empty by that time).

After flooding the carburetor, I pulled the starter cord once, twice, thrice, it did not cough at all. What a disappointment! My 1969 Seagull featherweight had started at the second pull... The 1970 Century coughed at the 5th pull, and started at the 6th only. I will lodge a strong complaint to their Customer Department. But then I realized that it was working so well it would not easily be stopped: minimum throttle is not enough, I must also block the air intake.

As my Testing bin was too short to properly secure the outboard, I could not test engaging the clutch in the bin (

I did try for 2 seconds and stopped before the propeller went through the bin sides).

Of note, the water cooling first did not flow at all, I stopped then restarted the engine and then it flowed perfectly.

I then went to my sailing club hoping for a windless day, and lucky me, the wind was so low it gave me an excellent excuse to try my Dinghy with my newly refurbished Century. 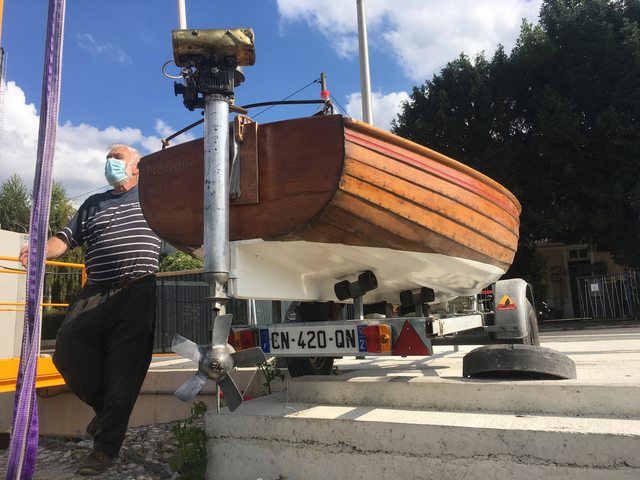 I found that I could easily fit my Seagull right in the center of the transom, the only problem is that the mainsheet traveller bar (if that is the proper name in English) prevents using the clutch lever... in fact I can operate it if I turn the engine sideways while doing so.

I think the 1970 Seagull matches my Dinghy very well, even if the outboard is a bit too modern for my boat (built in 1943). Since last trial with the featherweight, I made a simple tiller extension which is very useful. 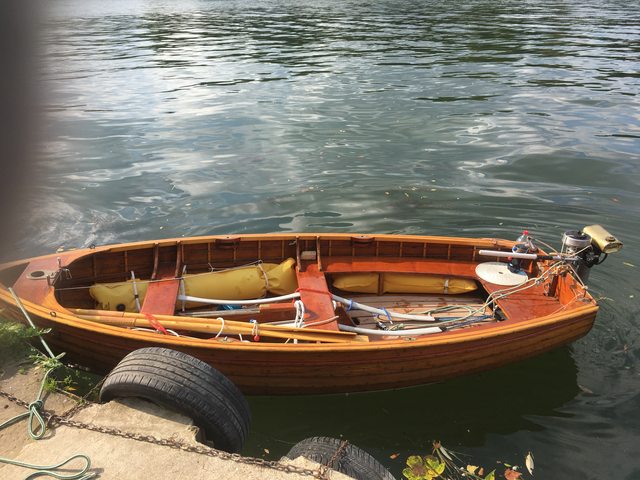 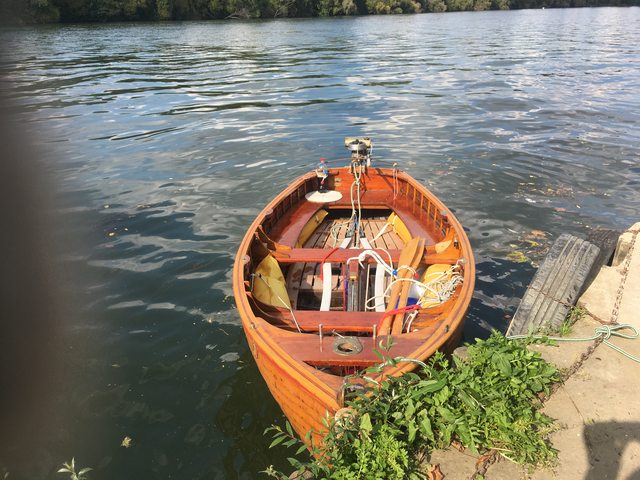 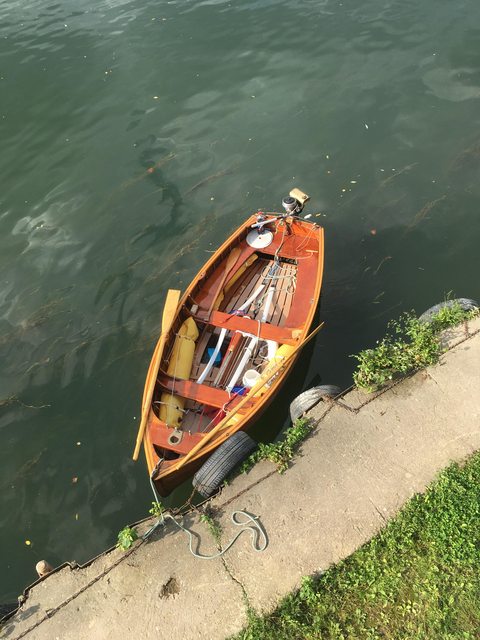 You can see loads of seaweeds (riverweeds?) that I had to avoid by first rowing offshore before engaging the propeller. But then it really did work! 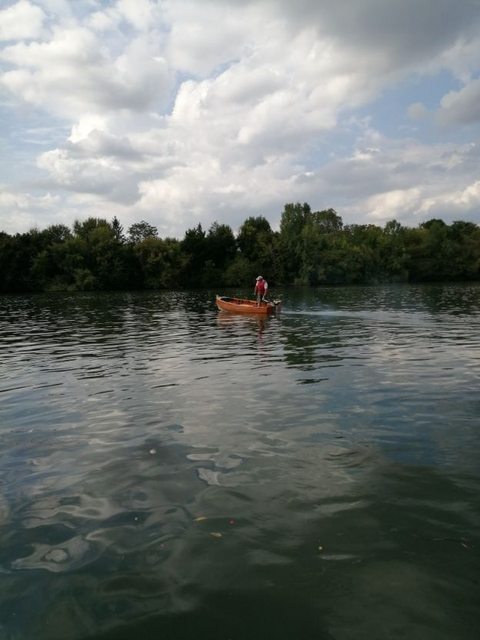 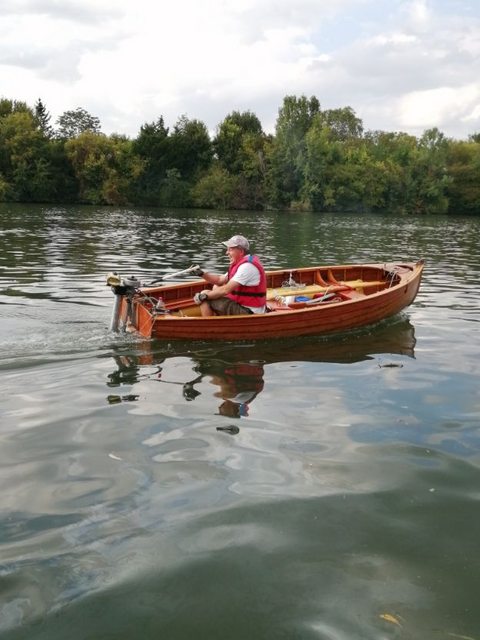 I was doing about 5 knots (4 knots upstream and 6 knots downstream), and could feel that the tuning could be perfected, the power was a tiny bit irregular, I have to check if too rich or too lean. At one time there was a loud explosion but no problems after.

Then, seaweed are very troublesome with that kind of propeller. It nicely wraps around the shaft, between the propeller and the gearbox and you have a very boring time to remove them (I had to go onshore again and remove the engine from the boat, I could not reach it with the long shaft and the traveller bar prevents me from lifting the seagull).

Last but more serious, I had some recurrent cooling problems, sometimes it was flowing well, sometimes the flow almost stopped, I don't know what is causing that. I had to stop the engine and a bit of smoke came out the water exit... I removed the engine from the boat, blew some air in the water system, then it was better for a while and then it gradually reduced again... any idea?
Top

That seems to me to be the perfect way to spend a Saturday (or any other day). Your motor looks great and I am very envious of your dinghy.
Keep up the good work!

I had to stop the engine and a bit of smoke came out the water exit... I removed the engine from the boat, blew some air in the water system, then it was better for a while and then it gradually reduced again... any idea? It could be a bit of rust the has come free inside the block. Or if the water flow is only week when going slow then it could be just that... go a bit quicker!
"THE KING OF BLING"!
Is it better to over think, than not think at all?
Top

Hurrah! I managed to open the gearbox! 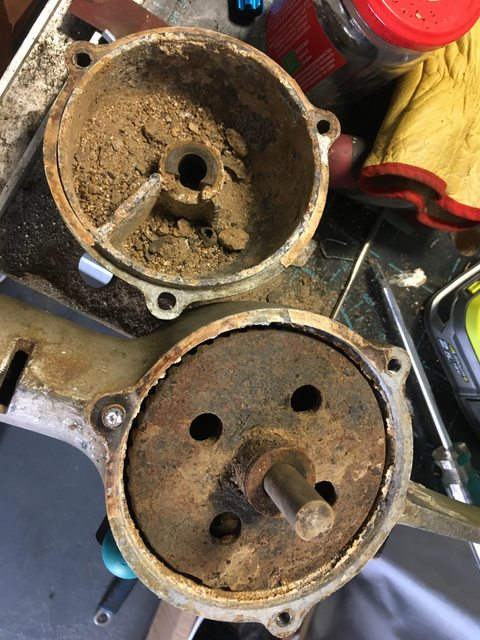 It's not in a very clean condition, it's quite rusty and the top screw that was resisting me finally sheared as I feared... I will try to drill it out.
Top
Post Reply
28 posts